You are at:Home»Life Changing Series»“Well, It Won’t Happen Here” – Forever Etched in My Mind

I didn’t see it coming.

Sometime life throws a punch which we don’t see coming. Punches that come without even a hint. This was one of those times.

Working for a large retail store in North Queensland as a Department Manager, I usually only spoke with our District Manager, Ray, when he toured my department, but today was different. He had requested a meeting. What? That never happens and it created some concern for me.

What could he want? What have I done? Was I in trouble? What’s going on? I had seen redundancies in recent times within the company, and those made redundant hadn’t seen it coming. This was not good.

I knew this wasn’t normal. After all, I had been doing this role in the store for five and a half years. I knew normality. I knew routine. I knew this was not normal. And it worried the heck out of me.

I was numb as I walked towards the office. Uncertain, nervous and in all honesty a bit confused. The door was open and Ray was inside with my Store Manager, Maurie.  Ray was seated to the side of the manager’s desk so I sat down next to him. Thankfully, Ray got straight to the point. “Tony, have you ever thought about being a Store Manager?”

From initial deflation to instant inflation. From seemingly holding my breath inside, not daring to breathe, to an outpouring of relief.  The pressure valve released and cocky, young Tony returned I breathed again.

“Of course, Ray, I would love to be a Store Manager” I replied, as if this was the most natural conversation I should be having. My confidence had returned and I felt great. Wow, they want to make me a Store Manager. Awesome.

“Well it won’t happen here.” Ray continued. The air sucked out of me again, as I waited on his next words.

“It won’t happen in North Queensland, Tony. We need to get you back to Brisbane.” “Ok”, I stammered. “I would need to talk with Sharon.”

And with that, my life that I had come to know and love, was turned upside down.

Rewind back five and half years. I had arrived in Townsville, as a young up and coming manager, hell-bent of enjoying my “country stint” It was accepted that managers had to do a “country stint” before they could move on and become a Store Manager. I was 22, I was ambitious and I wanted to enjoy the stint. It was 1988.

Fast forward back to the present time and I was very comfortable being a North Queensland boy. I met Sharon, the girl of my dreams, stole her away from another Tony when I got the chance, we bought our first house, got married and had our son, Tim. The ambitious young man, had certainly matured, was accepted into Sharon’s large family and basically was enjoying his time as a married man and young father. The two years had stretched into five and a half years without any drama at all. It just happened, and I was pretty comfortable and happy with that.

Now, it was all being turned around, upside down, inside out and in every way imaginable. This was tough.

The discussion that night was intense, only surpassed by the events of the month that followed. Sharon was amazingly supportive, considering she was the one giving up everything.  Losing the physical support of her family was huge. Sharon’s family was large, being one of 11 siblings and one thing we had come to cherish was the instant party a family gathering could become, with young and old kids alike enjoying our time together. Having her Mum close by was always handy for us with Tim.

But we had to face reality. Preparing our house for sale was high on the agenda, to finish all of the renovations we wanted to do, with the bitter-sweet reality of having the home we wanted, only to sell it and hand it to someone else to enjoy.

Researching real estate in Brisbane was equally interesting and frustrating, with Sharon having little idea of the city and the best places to live. Decisions had to be made on where we lived, and as Sharon and I were moving to stores on opposite sides of the city, we chose to live closer to Sharon’s work and into a new area for me.

We moved through our “must-do’s” with optimism and energy. While doing so, we spent many late nights simply talking and planning our new life coming up. These nights brought us closer, a strong foundation we needed for the year we would face.

These conversations really built the strength for our life together from that day forward, through great times and tough.

In the end, timing was perfect. Our house sold with the contract finalised, just days before we were due to fly out.  We had just under a week of catching our breath at Sharon’s parents place, before a final tearful farewell to a life we loved so much. A final wave and wiping away a tear as Sharon carried Tim up the airplane stairs. We took our seats, tightly held each other’s hands and smiled grimly.  Sharon looked out the window until she lost sight of the city of her birth, the city of her family, which was the city of Townsville. Symbolically when she lost sight, she faced forward in her seat and went over the plans for the remainder of the day.

That day with Ray, changed our lives dramatically. We had to rebuild a friend network, we had to rebuild our support foundation, we had to become independent and strong within. Our first year in Brisbane was our toughest EVER as we faced our tears, we faced our fears as well as facing the celebration of our daughter Tayla joining us and me getting the promotion I had worked for. That year we found us.

That year created our fight and resilience. It made us stronger, braver and wiser, setting us up for success together as a family. And since then, every new step we have taken we have done as a team, knowing that together we can face anything. We know that new levels do not come from standing still, they don’t come from being comfortable. We know that if we want better, we have to be better, we have to do better.

Often I hear Ray say as I dream about something new and amazing. “Well it won’t happen here”. And that compels me to get my backside into gear and get going, with intensity, energy and anticipation.

What are you dreaming of and maybe scaring you a little bit? Get moving because: 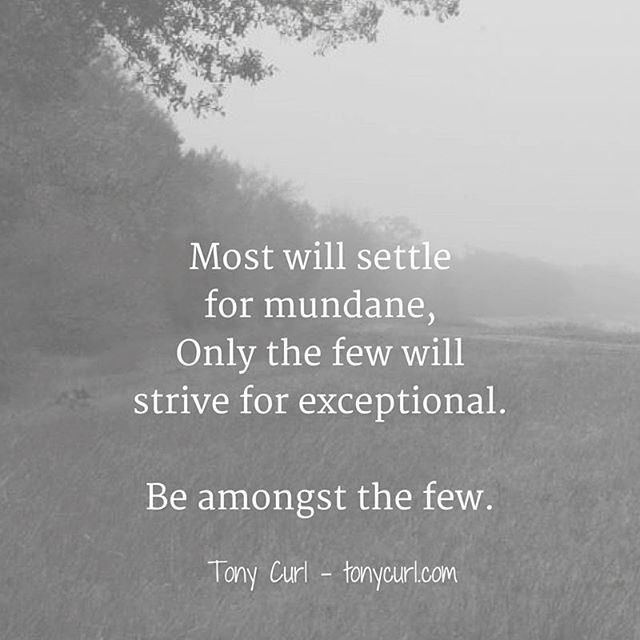 Tony Curl has been a successful corporate leader for 30 years. He now works alongside leaders in Australia to maintain clarity on their vision and purpose, and helps map their way around their roadblocks and obstacles. Unless you take action on your goals, they remain a dream.